What a Rockin’ KR McNab is capable of!

Hi everyone. My name is Ron Prentice and this is some of my recollections of some of the awesome McNab Shepherds that I have had the pleasure of having in my life as workmates and hunting partners. 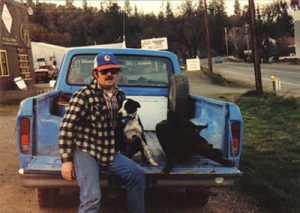 I first laid eyes on a McNab dog in the early 70’s on a ranch in Northern California just South of Willits along US Hwy 101. The first few weeks on the ranch was eye opener in terms of what is was going to take to get the cattle gathered and since it had been a while since the cattle been herded, they were a bit elusive to say the least.

In months following our arrival, the neighboring rancher offered to help us gather our cattle and he happened to have McNab Shepherd dogs. The first day we rode together and gathered cattle with his dogs I was awestruck at how athletic and brave the dogs were. From that first day I first laid eyes on a McNab dog I was bitten by the bug at what these dogs possess and their willingness to die if necessary for their owners. 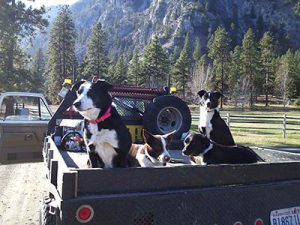 My first McNab came from our neighbors partner. He was a dog that would do whatever it took to control an ornery cow or catch a wild hog. For the next 5 years, riding and herding cattle on the ranch I would often end up with wild hog strapped across my saddle — courtesy of my McNab.

My first female a was named Annie Blue. She had a blue eye and was very smart and willing. It seemed every time we were riding pastures, Annie Blue and my male Duke would end up with a wild hog either caught or bayed up.

The ranch was over run with hogs and the pastures were continually rooted up and ruined. During this period, the hog problem on all the ranches in the area was really bad, so on the weekend my friend Frank Stone and I would ride around the ranch and try to find the wild hogs and put our dogs on them. 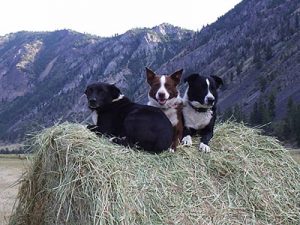 My next McNab Shepherd was a male and named Socks. He would actually jump out of the pickup if he smelled a wild hog as you drove by and he would soon have the hog caught or be bayed up and my friend and I would walk in to where he was and dispatch the wild hog. All told, over 200 hogs met their fate with my McNabs when they were not herding cattle.

Today’s Rockin’ KR McNabs have the same great herding and hunting instinct and are used for a lot of different disciplines. Herding, hunting, Frisbee, Fly ball, cadaver search, drug dogs — the possibilities are endless. They will pretty much serve where ever you want to give them a job.

This love affair with my McNab Shepherds has spanned 49 years. During that time many McNabs that have come and gone thru my life. It has certainly made it an adventure worth living. Today I stand looking back and thanking my creator for being so gracious as to have blessed me with letting me be a part of the greatest dog breed on the planet. From my perspective, if you own a McNab, they are your partner in all that you own or do, from day one. So saddle up and enjoy the ride.